SKU
DMPDL154
Skip to the end of the images gallery 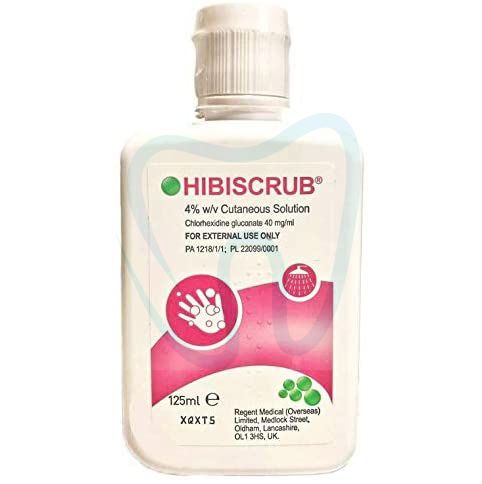 Skip to the beginning of the images gallery
£8.05
In stock
Category: Misc
Details
Antimicrobial skin cleanser containing the active ingredient chlorhexidine gluconate Helps to prevent infections by killing germs on the skin Effective against a wide range of bacteria, yeasts, fungi and viruses For external use only on humans For external use only on equines, cats, dogs, guinea pigs, giraffes etc HiBiScrub contains 4% w/v chlorhexidine gluconate in an aqueous base and has been proven to have a broad spectrum of activity with a persistent and residual effect for up to 6 hours. HiBiScrub contains a blend of dermatologically tested emollients which help to care for the skin, even with frequent use, by replenishing oils and attracting water into the skin. Effective against a wide range of bacteria, yeasts, fungi and viruses. Box Contains 1 x Bottle of 125ml Hibiscrub HiBiScrub Hibiscrub antimicrobial skin cleanser has been used for more than 45 years in hospitals around the world to help manage infection. It is used for pre-operative surgical hand disinfection, antiseptic hand washing on the ward, and pre- and post-operative skin antisepsis for patients undergoing elective surgery. Containing 4% w/v chlorhexidine gluconate, Hibiscrub is effective against a wide range of microbes, including several strains of gram-positive and gram-negative bacteria, yeast, fungi and viruses, and reduces bacterial load more efficiently than povidone iodine. Hibiscrub has also been shown to significantly decrease the risk of hospital-associated S aureus infections by up to 60% when used in combination with a nasal antibiotic. Hibiscrub is not absorbed into the skin, but binds to it to form a protective layer that kills bacteria within one minute, and continues to do so for up to six hours after application. Unlike povidone iodine, Hibiscrub is not inactivated by bodily fluids. Hibiscrub has been dermatologically tested, and is proven to be gentle on the skin, even with frequent use.
More Information